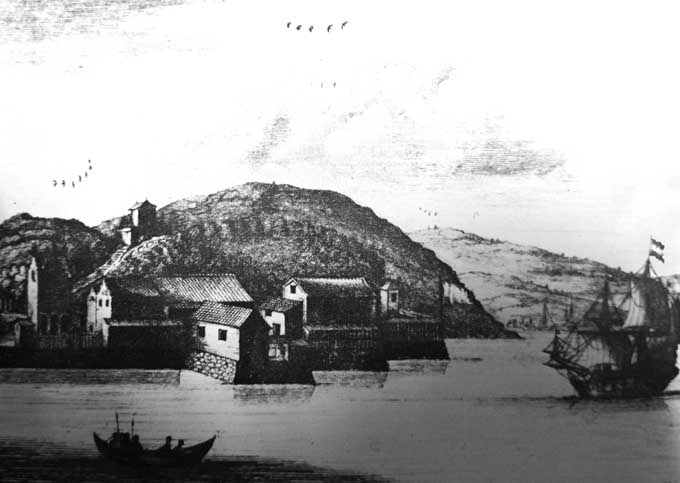 Until a few hundred years ago, tea was only drunk in Asia, and it was not until much later that tea spread around the world.

In 1519, Magellan completed his circumnavigation of the world, and many Westerners began to travel around the world. This was the advent of the Age of Discovery.

Near the end of the Age of Discovery, in 1610, a sailing ship carrying Dutch merchants stopped at Hirado, Nagasaki, where the Dutch traders purchased tea leaves.

Later, they stopped in Macau and bought tea leaves again, which became the first tea to be consumed in Europe.

These were the first teas to be consumed in Europe, and the tea became a favorite among Europeans.

Tea began to fascinate and gain popularity with Europeans.

Unfortunately, the export of tea from Japan declined sharply in 1639 when the Edo Shogunate, the government of the day, adopted a policy of seclusion, and exports of tea from China began to flourish.

After that, the Western world became obsessed with tea.

One of the most famous tea-related incidents was the Boston Tea Party Incident of December 16, 1773.
This was because the price of tea sold by the British East India Company, which had a monopoly on tea sales at the time, was too high compared to the price of smuggled tea. The colonists (Americans) were so angry that they attacked the East India Company’s ships anchored in Boston Harbor. They threw 342 boxes of tea into the sea, shouting, “We will turn Boston Harbour into a teapot”. The amount of damage caused by the dumped tea was said to be more than one million dollars, and the incident divided the colonists (Americans). In response to the East India Company’s claim for compensation, Benjamin Franklin, who is also famous as the founding father of the United States, attempted to pay for the tea (excluding the tea tax) with his personal fortune (in the end, no compensation was paid). As an aside, Boston was later placed under British military rule, which eventually led to the American Revolutionary War.

Another famous one is the Tea Race.
In 1834, tea imports from China, which had been monopolized by the British East India Company, were liberalized, and there was a great deal of interest in how quickly and freshly the first tea of the year could be brought back to Europe. It was called the tea race because the first tea of the year was sold at a high price and the ship owners and captains could earn huge profits and honor.
At that time, tea imported from China took a year and a half to two years to be brought back. But in 1850, the new tea was finally delivered within the year. The Oriental, a new American sailing ship, arrived in London on December 3, 1850, loaded with 1,500 tons of new tea and made a huge profit. This news was a great shock to the British, and in order to win the tea race, many fast tea clippers, such as the Cutty Sark, were built to transport tea. Later, with the opening of the Suez Canal (sailing ships could not sail through the Suez Canal because it was windless) and the improvement of steamships, the era of sailing ships came to an end and the tea race came to an end.

In 1823, the tea plant (Assam species) was discovered deep in the Assam region of India, which was then a British colony, by British adventurers Robert and Charles Bruce. In 1839, under the supervision of Charles Bruce, the first tea produced in India was auctioned in London. The production of tea in India had finally begun.
Tea production also began in Sri Lanka (1868) and Kenya (1903), and tea began to be grown all over the world.

In 1610, the first tea was brought back to Europe from Nagasaki. It fascinated the Europeans, and slowly changed the world.
I wonder what kind of tea it was.
I am very intrigued.