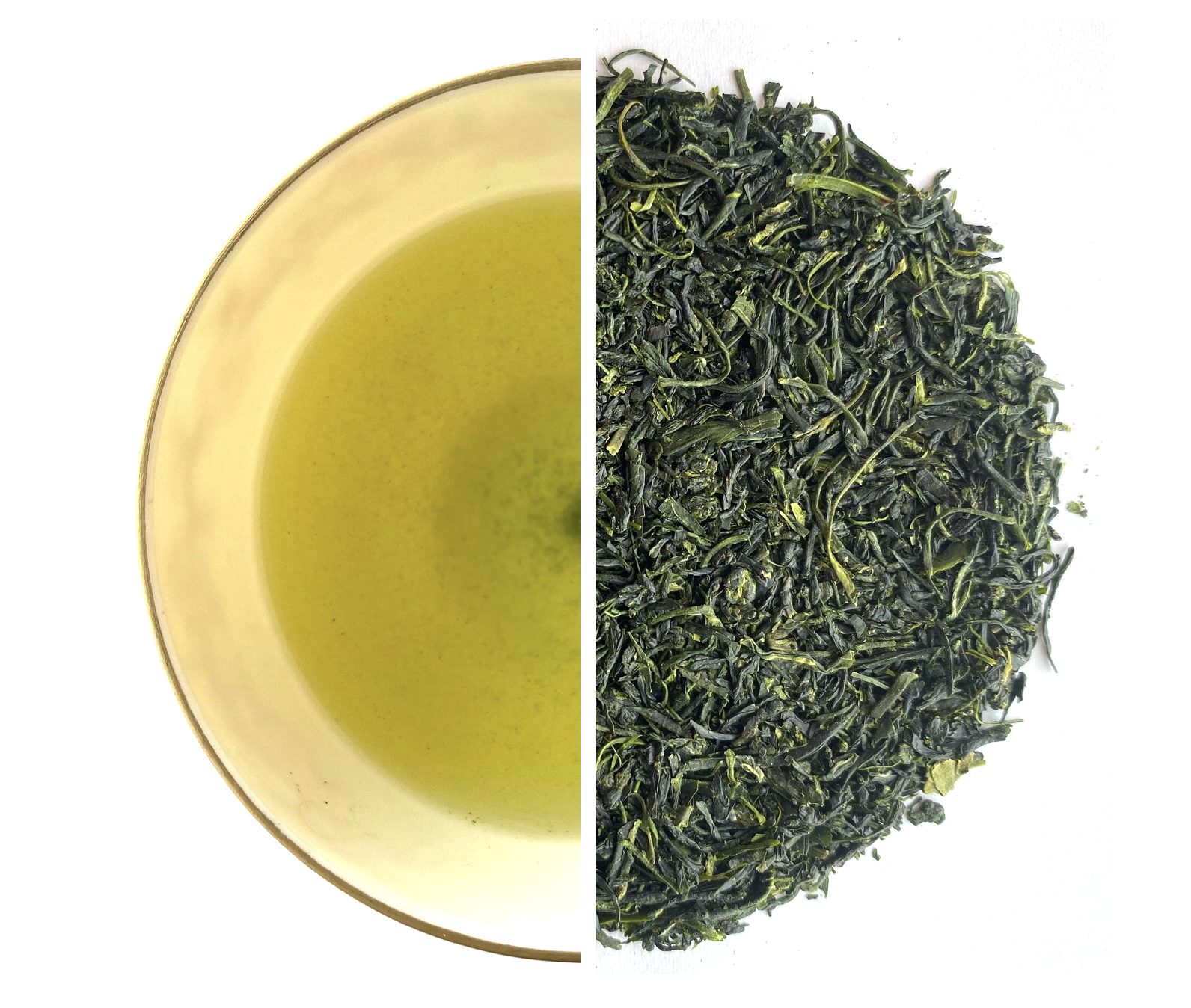 Tamaryokucha is a green tea that has a curved (curled) shape like a ball.

These two types of tamaryokucha look similar, but their history is a bit more complicated (and interesting).

“Tama” is often translated as gem or jade, and “ryokucha” simply means green tea.
Tama in this instance can be connected to the word magatama: curly or comma-shaped beads or gemstones (often made from jade) that were common in prehistoric Japan.
Incidentally, other honourable mentions of names in the tea naming competition included Magatama-cha, Marucha (maru = round), Hinomaru-cha, and Fuji-cha.

The history of pan-fired green tea in Japan is long, and there are many theories about its origin.

The first is that in 1504, in Ureshino, Saga Prefecture, a man named Koreimin (most likely not a specific person, probably someone from the Koryo Dynasty) roasted green tea using a nankingama (南京釜): a large wok-shaped pan with flatter bottom. Today, it is called Ureshino kamairi cha and is characterized by the use of a tilted pan that is inclined at 45 degrees.

The second theory is that carpenters, masons, and plasterers brought from the Korean peninsula by Kiyomasa Kato (1562-1611) settled in the town of Yamato, Kumamoto Prefecture, for the construction of Kumamoto Castle. These people from Koryo handed down this way of tea processing from generation to generation. This type of tea is now called Aoyagi kamairi cha, and is characterised by the fact that the kama is set horizontally.

In the 1960s, there were more than 900 kama-roasted tea factories in Kyushu alone, but today, it is estimated that less than 0.5% of the total tea production in Japan is pan-fired.

There are many theories about the origin of guri-cha, but guri (倶利, kururin) refers to a swirl or spiral shape used in temple architecture, and is said to be the origin of the word “guri-guri”.

The production of tamaryokucha increased rapidly, reaching over 10,000 tons by the late 1930s.
In the 1930s, 80% of steamed guricha was produced in Shizuoka Prefecture.

However, the production of steamed tamaryokucha in Kyushu continued to grow and peaked in the 1980s at over 5,000 tons.

Today, about 1,700 tons of steamed jade green tea is produced annually throughout Japan, accounting for about 2% of the nation’s total tea production.

Steamed kamairi cha
As a side note, steamed kamairi cha, a type of tea that does not exist today, was once produced in Ureshino.
In the book “Japan” written by Siebold, who came to Japan in 1823 at the end of the Edo period, it is described that “freshly picked leaves are steamed in a steamer basket and dried in a flat iron pot.”
According to this description, fresh leaves are steamed in a steamer to kill the green leaves, and then dried in a pan, which is a tea making method that is not used today. This method was called the sechu seiho (折衷製法), or eclectic method, and the resulting tea was called Yumushi Kamairi cha (湯蒸し釜炒り茶), sechu cha (折衷茶), or Mushisei Kamairi cha (蒸し製釜炒り茶).

Characteristics of Tamaryokucha
The characteristic of steamed Tamaryokucha tea is that it does not have the fine rolling process used for Sencha, but instead has a process called re-drying. Because there is no needle-shaping process, the tea leaves become curled in shape.
In addition, the recent trend of steamed tamaryokucha is that it is deep steamed, so the tea liquid colour is dark green, and the aroma is clear and refreshing because there is no fine rolling process.